You are here: Home / Positive Birth Stories / Surprise home water birth: The most incredible experience of my life! 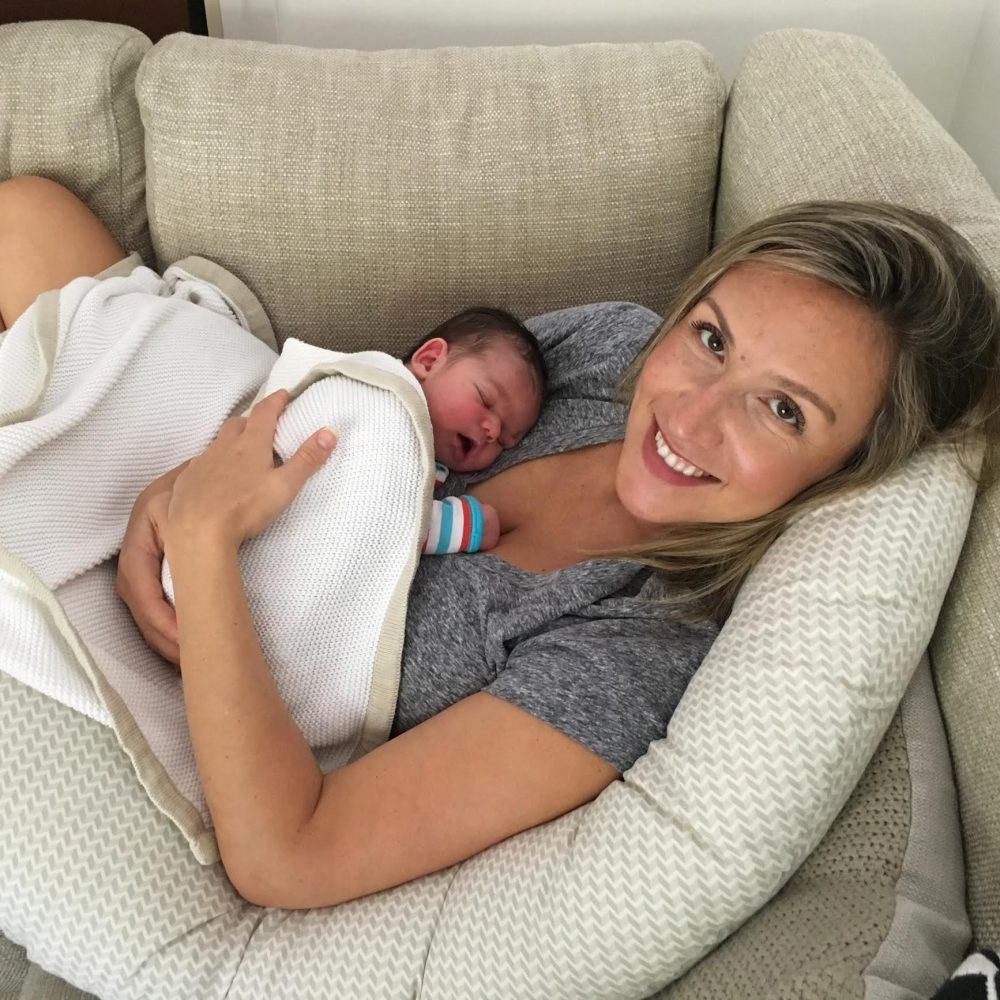 I recall the first day I attended a Prenatal Yoga class at around 24 weeks pregnant. At that stage, I was so nervous and fearful of the thought of childbirth, that I ended up bursting into tears in front of 15 or so other yoga class mums at the end of the class. Obviously, I knew it was a safe environment to be emotional, amongst other pregnant, hormonal women but none-the-less it was a little embarrassing.

The transformation that I then went through over the next few months after attending the classes and also completing the Calm Birth course along with my husband, was amazing.   I started to feel excited at the prospect of meeting my baby and that feeling replaced the fear for the most part. I spent the next few months on the run up to my babies birth, meditating most days, treating myself to acupuncture appointments, massages, soaking in the tub most evenings, going for walks along the beach with my husband – anything to nurture the feeling of calm before the birth of my baby….

In jest my husband has referred to my premenstrual cycle like a ‘German train’ in the past, always being like clockwork with regularity so as I approached my due date of 40 weeks gestation, I thought to myself “it wouldn’t surprise me if my baby decided to enter the world bang on its elusive due date” (even though my midwife informed me that only 5% of women deliver on their actual due date)….and sure enough, on the evening of 12th October, I began to feel some pre-labour sensations pretty strongly and by midnight that night, labour gently commenced.

I had planned to labour at home for as long as possible with Sacha (my husband) and my midwife (Alison Broderick from Coast Life Midwifery), and then to head to Nambour hospital when Ali (our midwife), advised us to.   As labour had commenced gently that evening and I felt pretty calm, I decided to set up a ‘station’ in the living room leaving Sacha to get some sleep until I felt I needed him by my side for support.

I warmed up my heat pack, lit some candles, rubbed labour oil onto my belly and sat on my birthing ball till about 5 am, all the time breathing through my contractions as calmly as I could. At 5 am I started timing my contractions as they began to feel quite frequent and sure enough I was averaging 3 contractions in a 10-minute time span so I thought it was time to call Ali and wake my husband up. I can honestly say that as I was so in ‘the zone’ that night that time had flown by so quickly and I hardly noticed that I had been labouring for 5-6 hours already…

Ali arrived at our house by about 6:30am at which point she did an internal examination, only to alert me that my waters had indeed broken even though I hadn’t really realised. Everyones experience of this seems to be so varied, some people experiencing a loud ‘pop’ noise, followed by gushing water and others hardly seem to notice that their waters have broken and my experience was the latter.

At that point, I was 4cm dilated and Ali thought that labour was progressing very nicely but that it was probably a little early to head to the hospital. So the three of us sat and hung out, me rolling about on my birthing ball (I found walking about and moving to be quite difficult, although I kept trying every 30 mins or so just to keep things moving), and Ali and my husband eating toast and drinking tea whilst rubbing labour oil onto my tummy and supporting me through my contractions. It was a very calm scene at our house that morning, hardly what you would expect labour to be like.

At about 8:30am my contractions started to slow down slightly and I was feeling quite tired and drowsy between contractions so Ali suggested that perhaps I try to rest as much as possible during this natural ‘break’ my body had given me. She suggested that she would leave me for a while and when things speeded up, that we should call her back. This seemed like a good idea to us and so she left and I was able to get some shut eye (whilst still sitting on my birthing ball), in-between contractions.

After about 45 minutes, things began to speed back up and this time my contractions felt stronger and a little more intense. My husband suggested he run the bath for me and I sit in there as well as calling Ali back to the house.   As soon as I got into the warm water of the bath, I relaxed and breathed into my contractions a little more and things started to speed up even more…in fact, at this point, I started to feel the urge to push.

Ali arrived about an hour later, by which point I was really having to breath and use my voice to breath through the contractions. Sacha was relieved to see Ali when she returned to the house and left us in the bathroom whilst he put the last bits in the car that we would need for the hospital. As soon as Ali saw that I had begun the urge to push, she realised that it was going to be a little dangerous to attempt to get to the hospital at this stage and in my mind, there was no way that I could move from the ‘comfort’ of the bath and the safety of home as I was now in the late stages of labour.

After a brief chat, we decided it was the safest option to stay put although I had to verbally agree that I would take an ambulance to the hospital if anything started to go wrong and also that Ali would need to call in a back-up midwife in order to fore fill the legal requirements to birth at home. Once that was all settled, it was almost a little comical upon reflection as Sacha had to dig out a mirror and flashlight from his helicopter engineering kit as Ali hadn’t brought some of her essential birthing at home gadgets with her – these items will forever remind us of the day Luca was born at home in the bath.

The second midwife arrived about 45 minutes later, by which point my superstar husband had already changed into his board shorts and jumped into the bath with me to put cool towels on my head, ensure the water was warm enough and say supportive words in my ear – I could never have done it without him there and we both reflected afterwards on how we could never have felt secure enough to birth at home, completely unaided by any medical pain relief had we not done the Calm Birth course.

It was amazing at this stage of labour to be so aware of what was going on in my body (again, all knowledge we had learned at Calm Birth).   I recall being aware of the sensation of the baby travelling down through my birthing canal and at the stage when the babies head began to emerge into sight, he would slowly stretch the opening a little and then retract a little and then stretch again and each time a little more of his head would show. Once he had crowned, then the last push saw his whole body come out very easily. I reached down and caught my baby before Sacha brought him out of the water only to say with delight “it’s a boy!”.

The three of us sat in the bath for a short while and hugged and cried – such a special moment that I will never forget and in fact every time I bath my baby now, I recall the experience of birthing him right there in the bath of our ensuite bathroom.

Once he was born, the midwives helped me out of the bath and into my bed. It was so special to be able to crawl into our very own comfortable bed right after he was born and lie together with the three of us having skin to skin time before my husband cut the cord. The third stage of labour was a little tricky, my placenta took about 45 minutes to come out and had to be aided by some medication that the midwives gave me to give me some contractions. I lost quite a bit of blood during this process but all was cleaned up in no time, and I felt cared for and safe with my midwives taking no chances.

After labour was finished and the three of us lay tucked up in bed, a huge tropical downpour of rain began for about an hour…it was so cosy and kind of romantic in a way. A good friend’s little boy (aged 4years old), knick named Luca “Luca Rain” after the huge downpour on his birthday and the name has kind of stuck now between close friends and family.

It was probably a week before we left the house with Luca and there was something so special about the fact that Luca was both conceived and born in our first family home together.

PS I would like to thank you, Katrina. Reading your book was the beginning of an empowering transformation preparing me for the birth of my first baby. It was so refreshing to read positive birth stories instead of being bombarded with everyone’s horror birth stories. After reading your book, my husband and I also went on to complete a Calm Birth course which complimented many of the theories you speak about in your book. Our son was born at home, 100% naturally in the bath and it was hands down the most incredible experience of my life. Thank you for reminding me that we are born to do this and for giving me the confidence to trust my body.   Thank you so much, Love Elodie x 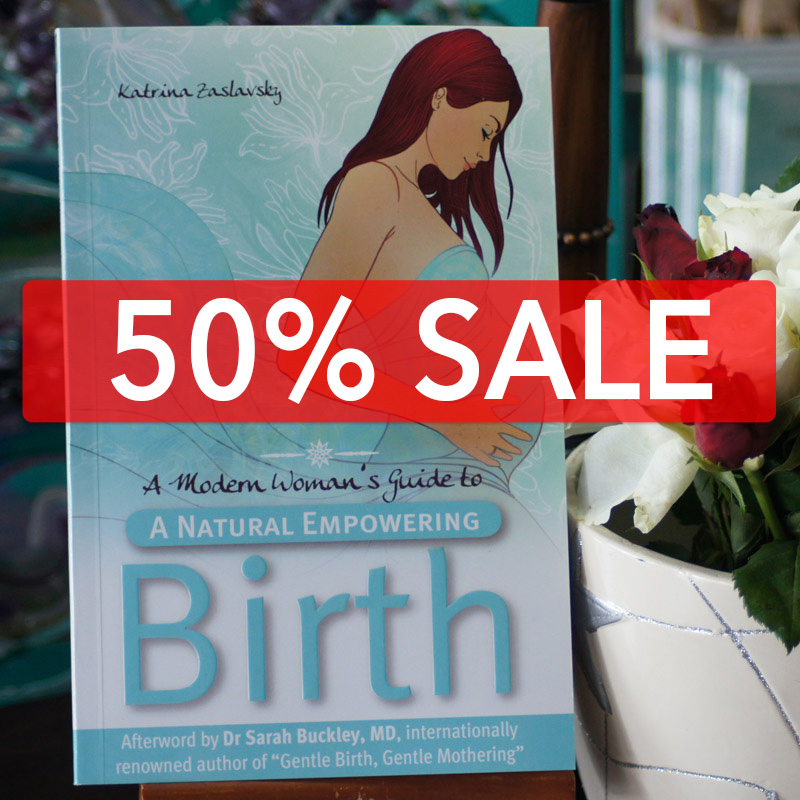